Five Moves of Doom - A Review 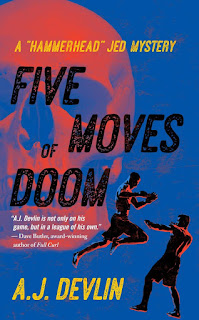 FIVE MOVES OF DOOM by A. J. Devlin
The Third "Hammerhead" Jed Mystery

PI and former wrestling champion "Hammerhead" Jed Ounstead is called in to the world of mixed martial arts to investigate the theft of a prized UFC Championship belt. His investigation leads him to a bad tempered bodybuilder, an old friend, baby goats, and a very dangerous man. Just when he thinks he has come to a satisfactory conclusion, things take an abrupt turn...and not for the better.

The third "Hammerhead" Jed Mystery has so many twists and turns you'd think you're in the midst of a wrestling match yourself! While there are plenty of laughs, the story soon becomes quite serious. Jed was overconfident, thinking he was all that. He wasn't ready to be taken down. He was. This is a tale of facing your own limitations and how you deal with losing. Will you fight your way out or give up? Ultimately you will change. And after the shocking ending, Jed will be forever changed.

FIVE MOVES OF DOOM is a series of mind games, with Jed facing his most dangerous opponent yet-his own mind. I loved the cerebral aspect of this book and how the person I thought was going to be the big baddie wasn't. Instead a new depraved character emerged. Lines are crossed. Fates are sealed.

Compelling, engrossing, thought provoking, yet still humorous, FIVE MOVES OF DOOM is a brilliant look at what happens when you reach rock bottom. Grab a banana milkshake and be prepared for the ride of a lifetime.